I have been trying to find a way to be able to do a single-command quick-launch of multiple text editors and multi-paned terminal windows for a long time.

Here’s an example from one of my side projects. I want to be able to launch all of these at once by typing a single command: 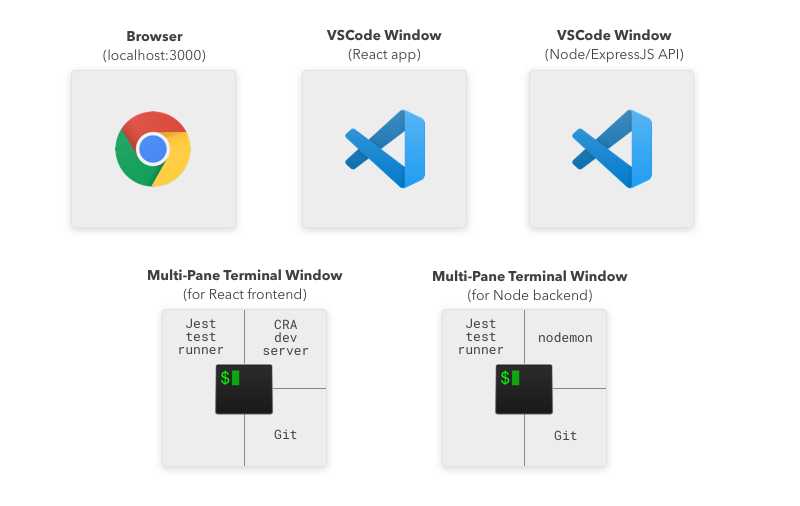 I don’t want to spend mental energy on getting this up and running each time. I just want to enter a single command into my terminal and have all these to spin up (including all the terminal items in a saved multi-pane arrangement).

After a ton of searching and testing, I’ve finally got it.

As you can tell, this is for a Mac. I’m sure there’s a Windows equivalent, but I haven’t looked for it.

I’ll go through the entire setup config from the side project I mentioned earlier. You should be able to use this as a starting point to dial in your exact process and window arrangement preferences.

The first step is to install both iTerm2 and itermocil. Click those links and follow the directions for both those tools.

For my project, the frontend and backend use the same window arrangement and start commands that are sent to each pane, but it doesn’t have to match, you can alter each itermocil config as needed.

The project I set this up on is for Photo Invoice, so you’ll see that scattered throughout. Replace that with your project name.

Each of these profiles opens three panes:

So by running these two itermocil profiles in separate iterm tabs, all the windows/panes from the graphic above are taken care of.

All that’s left is setting up an alias to launch both of these profiles with a single terminal command.

I use zsh (with oh-my-zsh), so I’ve set up one extra zsh alias as follows:

With this in place, by typing the command pidev and hitting enter, both itermocil profiles launch (in new iTerm tabs), each with 3 pre-arranged panes. The commands ran in the various iTerm panes open VSCode windows for that project and start the dev server, which also opens a browser window to localhost:3000: 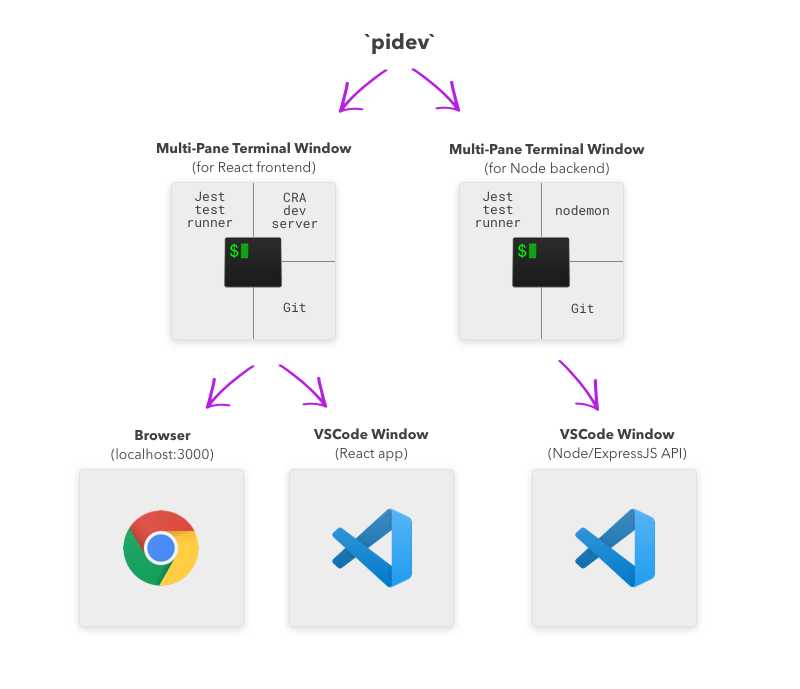 Finding itermocil and putting these pieces together was a big win- I’d been wanting a setup like this for a long time. It’s well worth the initial setup effort in order to save the time and mental energy of being able to launch the dev environment for a project with a single command.

What was helpful? What did I get wrong? Let me know on Twitter! @markadamfoster